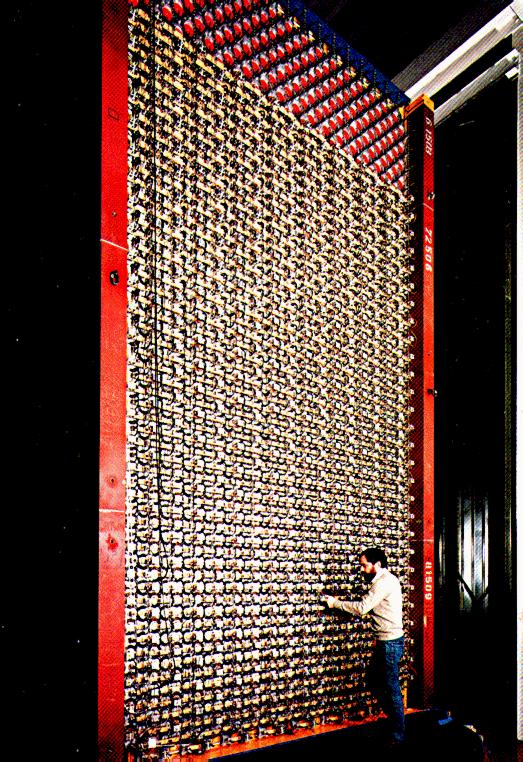 One major aim of KARMEN is the investigation of neutrino-nucleus interactions via neutral current (NC) and charged current (CC) reactions on nuclei like 12C, 13C and 56Fe. The well defined neutrino energies from ISIS together with the excellent calorimetric properties of the detector ensure the spectroscopic quality of the obtained data.

The second main physical intention is the search for neutrino flavor oscillations as an evidence for massive neutrinos and the search for lepton number violating pi+ and mu+ decays. These processes, forbidden in the standard electroweak model (SM) would also point to 'new physics'.

The KARMEN neutrino experiment uses numu, nue and numubar produced in the pi+ mu+ decay chain at the beam stop target of the ISIS neutron spallation source at the Rutherford Appleton Laboratory in England. More than 99.9% of all pi+ and mu+ are stopped within the target and decay at rest. This leads to well defined neutrino energy spectra in a range of 0 to 52.8 MeV. The time structure of the ISIS proton pulses allows the separation in time of numu-induced reactions from those induced by nue's. Neutrinos are detected in a 56t scintillation calorimeter situated at a distance of approximately 18m from the source.

The 1990-1995 KARMEN data showed no signal for numubar->nuebar oscillations, however, the positive LSND result in this channel could not be excluded in total. To increase the KARMEN sensitivity a major upgrade of the detector was undertaken in 1996 to reduce the small but dominant cosmogenic background. To tag the cosmic muons in the vicinity of the detector, a further active veto layer within the blockhouse has been built in 1996. The new veto system reached its designed aim to reduce cosmogenic sequential background by a factor of at least 40. Since February 1997 data are taken with the new detector configuration. At the end of 1999 the KARMEN sensitivity for numubar->nuebar is expected to exclude the whole parameter region of evidence suggested by LSND if no oscillation signal will be found.