Neutrinos are the most abundant subatomic particles in the universe. Thus they are crucial for understanding the development of the universe in many cosmological models and calculations. The international Karlsruhe Tritium Neutrino Experiment KATRIN   is located at KIT campus north and aims to determine the effective neutrino mass in a direct and model-independent way with a sensitivity of 0.2 eV (90% C.L.). Before the start of KATRIN, the Mainz neutrino experiment has determined an upper limit of 2.3 eV for the effective neutrino mass. After the first tritium measurement campaign, KATRIN has found a new upper limit of 1.1 eV (90% C.L.).

Therefore, KATRIN measures the end point of the tritium beta decay energy spectrum with great precision. Compared to previous experiments it scales up size, sensitivity, and also the amount of radioactive material by an order of magnitude. Tritium is used as radioactive source; the maximum energy of the electrons is about 18.6 keV. The whole experiment can be separated into tritium bearing and tritium free sections. The tritium section is completely inside TLK and the tritium free part (spectrometers and detector) is located in an adjacent building. The tritium section is subdivided into the source and the transport section. Both are described below.

The tritium source: In nuclear physics, radioactive sources often consist of a closed chamber where the radiation can escape through an embedded window. However, KATRIN has a windowless source resulting in an open and free path for both electrons and molecules from the source to the following sections. As tritium is injected in gaseous form, the whole source is called Windowless Gaseous Tritium Source (WGTS). In the WGTS, tritium is circulated through a beam tube, which is cooled down to 30 K (-243 °C) and contained within a strong magnetic field (2.5 – 3.9 Tesla).

Similar to other tritium applications, it is absolutely necessary to use a closed gas cycle. The tritium gas is pumped out at both ends of the tube and afterwards purified and injected back to the beam tube keeping a constant isotope purity. 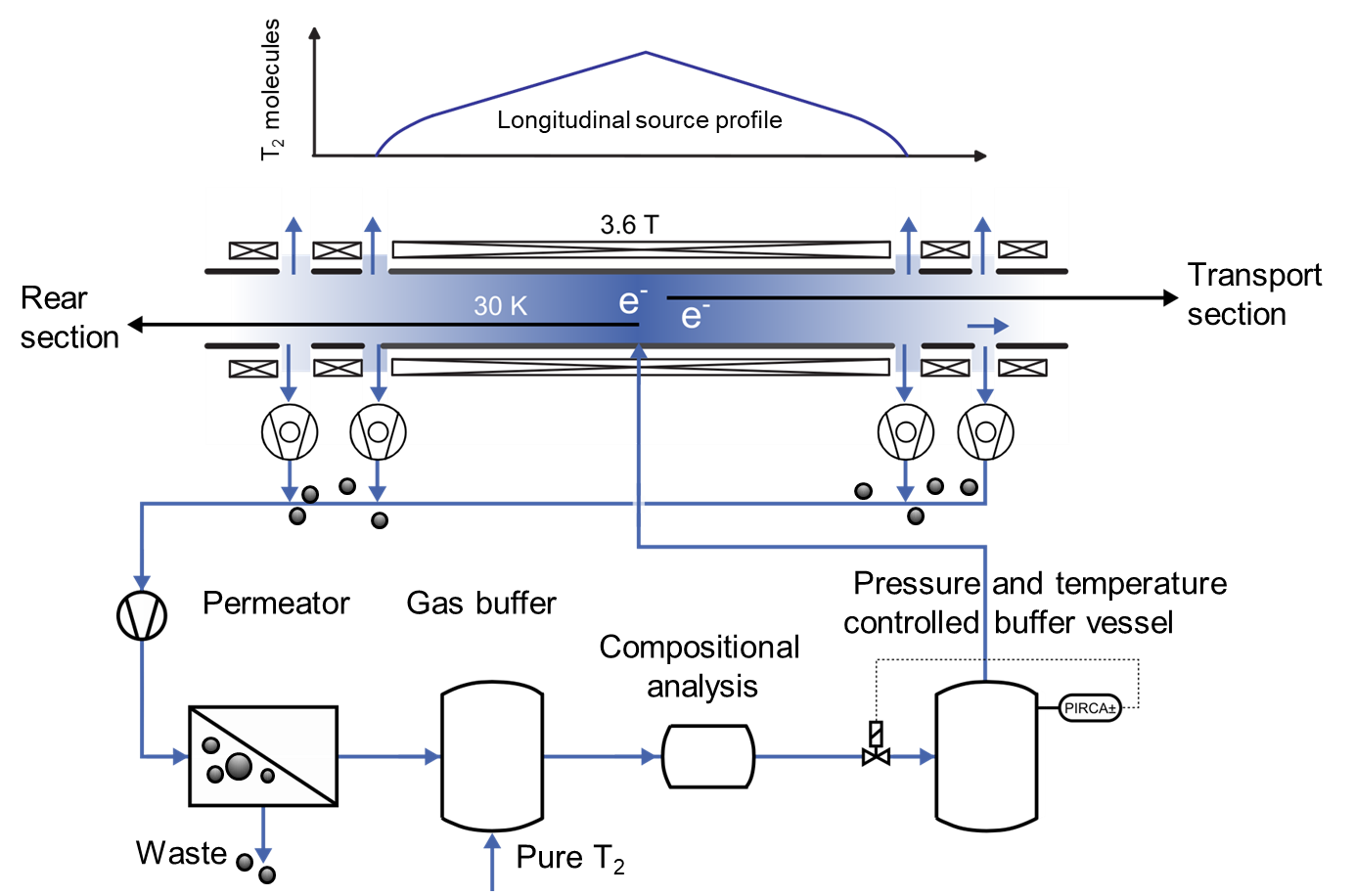 The first part of the transport section is the Differential Pumping Section (DPS). Therein tritium molecules are extracted out of the volume by turbomolecular pumps. Twelve of these differential pumps reduce the tritium contingent by more than a factor of  10^7. The segments between the pumps are tilted by 20° to each other in order to prevent a direct line-of-sight to the spectrometers.

The second part of the transport section is the Cryogenic Pumping Section (CPS). On the inner surface of the beam tube an argon frost layer is prepared and cooled down to 3 K (-270 °C) by using helium as a coolant. . With this setup, the incoming tritium molecules are adsorbed on the argon frost surface and an additional tritium flow retention of more than seven orders of magnitude is reached.

The TLK is the only scientific laboratory in the European Union and America which has the license for the application of such an amount of tritium. Furthermore it has the infrastructure and experience that are necessary for the accomplishment of such a complex task. All research related to the tritium source and its development is done or coordinated by the TLK. All tritium bearing sections of KATRIN are installed within TLK.